Often, ‘yes’ is the easiest word in the world to say. Saying ‘no’ takes resilience and strength of character, but it should be in the top drawer of any project manager’s toolkit, and you should never feel bad about saying it! 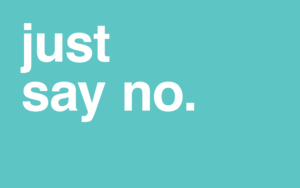 ‘Strength of character’- It’s an overused phrase, but for a project manager to succeed, it’s an absolute must. This article serves to remind you of those situations where project managers have struggled to say no, to the detriment of themselves and their projects.

Most projects are genuinely valuable, and begin with the best of intentions. In fact, most projects will provide long-term value if they are properly chosen, and executed correctly. However, project managers must use their knowledge and experience to flag red lights early in a project, when they first see them. Sometimes this will mean pulling the plug altogether. It’s a tough call to make, but which is worse: saying ‘no’ and forfeiting a contract, or failing so badly that your long-term reputation is damaged?

It is always easy to say ‘yes’ to a project that seems straightforward, easy to complete and resource-light. However, beware the poisoned apple! These ‘’no-brainer’ projects often end up running way over time and cost, simply because they look easy, and get the least attention. Complacency is a huge danger. It is always better to complete one project successfully, than struggle to finish two projects late and over-budget.

Projects that seem quick and easy on the surface are most often the ones that are the exact opposite.

Projects that seem quick and easy on the surface are most often the ones that are the exact opposite. When it comes to execution, too often you will under-estimate the time and resources needed. Project work almost inevitably leads to more project work, and it’s too late to say ‘no’ when the scope has crept to a dangerous point. Evaluate every project with an independent eye, and as an independent entity. Say no, and keep your blood pressure low!

Projects also tend to have a certain air of inertia surrounding them, where they take up more and more time, but less and less is really being achieved. Often, projects managers allow themselves to get wrapped up in particularly non-constructive work-flows. It takes enormous strength of character to stick your head above the parapet, and stop the inertia there. This is particularly hard when a project is a key part of an overall programme, and particularly in a bigger project which is growing and growing, but it is always better to be brave than meek.

When we surveyed a group of project managers recently, most initially said they were always (or nearly always) able to see the ‘big picture’ on a project, and avoid getting stuck in the weeds. However, this confidence was not borne out with greater inspection of the facts. Project managers are too often inherently obsessed with inputs and outputs, correct methodologies and the pursuit of efficiency, and unable to see how all of the above fit into the overall grand plan. Sometimes, it can be hard for them to see the wood for the Gantt chart.

Saying ‘no’ at a time where it might cause problems is a brave thing to do, but with hindsight, it can often save huge project lag, avoid a squeeze on resources, and save damage to the reputation of the project manager in the long-term.