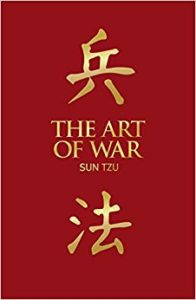 The Art of War, a 13-chapter masterwork written in the fifth century BC, is referred to even now, two-and-a-half millennia later, as one of the definitive texts on military tactics and strategy. Some things never change…. Sun Tzu, its author, may not even have existed, or may be a composite of different strategic geniuses, but ‘he’ remains an exalted figure, and reading it today, as a project manager, it’s easy to see why.

You may think that this is a strange book to reference in the pursuit of better project management. But what project manager can honestly say that at times, getting to the goal of a completed project doesn’t sometimes feel like a battle at best, if not at times like a war.

Countless books have been written on the parallels that can be drawn between this work and business management, but none have examined project management specifically. To save you reading 200 pages, we have narrowed the key points down to the six below. Sun Tzu says: read on.

How to win over everybody, without even fighting? Happy stakeholders mean a happy project, and in turn make you look better. Equally, leading by force, and alienating people in the process may lead to a positive outcome, but the damage done to yourself and the project in the mean-time is destructive. Leadership takes many forms, but project managers need to focus on the non-hierarchical leadership needed to win people over, without them realising they’ve been led. Let’s distil this down to the timeless adage: ‘more carrot, less stick’.

2.
“Know the enemy and know yourself; in a hundred battles you will never be in peril.”

Too often, project managers pay too much attention to the project and problems facing them, and too little time taking a long, hard look at themselves. Self-understanding, and an appreciation of their own emotional intelligence (or blind spots therein) are what sets great project managers apart from average ones. If you understand yourself, you understand how people will react to you, and you’re already one step ahead of the game.

3.
“He will win who knows how to handle both superior and inferior forces.”

Stakeholders, anyone? It’s not just about impressing the senior ones. Often, it’s the guys on the front lines who need the most encouragement, and you need them to trust you. Don’t focus on impressing your paymasters. You may not get paid if you alienate the troops!

4.
“To rely on rustics and not prepare is the greatest of crimes; to be prepared beforehand for any contingency is the greatest of virtues. Those skilled in war bring the enemy to the field of battle and are not brought there by him.”

Risk – ignore it at your peril! Know what’s coming down the track and be prepared for every eventuality. If you know intimately every risk you face, then you can deal with them before they arise, or at least be the first to deal with them, before you lose control.

5.
“When you surround an army, leave an outlet free. Do not press a desperate foe too hard.”

Change is difficult, and when tasked with implementing huge change, you must leave just enough room for manoeuvre. When you box people in completely, they are much more likely to take the ‘nuclear’ option, and you are more likely to fail, or at least end up with egg on your face. Change is inevitable, but always give people the room to take the right path by their own volition.

6.
“When one treats people with benevolence, justice and righteousness, and reposes confidence in them, the army will be united in mind and all will be happy to serve their leaders. Treat your men as you would your own beloved sons. And they will follow you into the deepest valley.”

Leadership – how to run a project when you can’t pull rank over anyone? Understanding, trust and graciousness are the answers. The better you treat people, the better they will treat you, and the more they will want to work with and for you. Never, ever, stop listening. Sometimes, letting people have their say is more valuable to you than talking. You may not agree with them, but once you’ve given them the chance to talk while you listen, your currency rises.