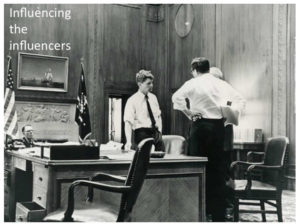 Robert Kennedy’s influence in the administration extended well beyond law enforcement. Though different in temperament and outlook, the President came to rely heavily on his brother’s judgement and effectiveness as political advisor, foreign affairs counsellor, and most trusted confidant.

An Influencer is a strange person. They wield power in an often hidden, Machiavellian way, sometimes serving their own self-interest.

To begin, let’s define influence as “the power to affect, control or manipulate something or someone; the ability to change the development of fluctuating things such as conduct, thoughts or decisions; an action exerted by a person or thing with such power on another to cause change; a person or thing exerting such power or action.” The key point in all of this is power! Influencers might not be able to direct people to do something – but they exert a different type of power which is equally, if not more, important. Projects are much more likely to succeed when backed by clear, active support from other influential people. Do we need to identify the influencers? Yes, we do need to identify them but first, we need to categorise them.

There are four types of Influencers in an organisation:

What Type of influencer are they?

Next, you need to identify and understand the role that each of the influencers plays. I’d recommend Michael Lennon and Eva Schiffer (Discovering hidden influencers that make or break project success) business “paper-and-pencil” drawing tool. It is a simple and smart “Net-Map” which helps people to interactively identify influence networks and depict the information in an intuitive and quantitative manner.

Put simply, you have to pay more attention to some people than others. When you stop and think about it, you already know that some people in an organisation have more influence than others. You know this instinctively and need to bring this knowledge into the project to initiate effective leadership.

“There is nothing more difficult to take in hand, more perilous to conduct, or more uncertain in its success than to take the lead in the introduction of a new order of things.” Niccolo Machiavelli

“There is nothing more difficult to take in hand, more perilous to conduct, or more uncertain in its success, than to take the lead in the introduction of a new order of things.” Niccolo Machiavelli

Influencers have the power to help or harm you. In order to responsibly manage your influencers, take time to identify and evaluate them. Know that influencers get things done. They effect change. They make things happen. You need to know you can leverage them for maximum impact. Lead influencers to your expected outcomes. Influence the Influencers! Know them. Understand them.

“The lion cannot protect himself from traps, and the fox cannot defend himself from wolves. One must therefore be a fox to recognize traps, and a lion to frighten wolves.”  Niccolo Machiavelli